RIC 6-1 was dispatched just before 2130, to the 300 block of Ogden Rd in the Oak Valley section of Deptford Twp. Crews from Deptford arrived on scene with heavy fire conditions on the number 2 floor, and made an interior attack with an engine from Wenonah. RIC 6-1 arrived on scene and performed a 360 of the residence and provided points of egress for the crews working inside by placing several ground ladders around the residence. Crews remained on stand by for approx. 1 hour with RIC 6-6 (Greenfields) while crews brought the fire under control. 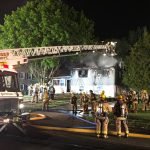 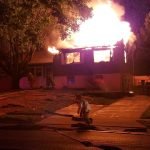